It’s a very cool Google Maps hack that scrapes realtime DART position info from Irish Rail’s website and plots it on a Google Map of Dublin.

Be sure to zoom in – you can actually see the trains moving in realtime. Click on a train to find out its destination.

Amazing what you can do with a bit of XML, scripting and some ingenuity…

New Scientist has an interesting article about a new robot with a knack for finding its feet.

While there have previously been some impressive demonstration videos of robots from Toyota, Honda and Sony, this is the first robot I’ve seen that actually mimicked human like movement patterns.

You can download the 13 MB demo video here; it’s rather unsettling to watch.

I came across this article about RAID systems under Linux, and some of the problems that can occur.

It’s interesting reading, especially the explanation as to why a single drive failure in a Linux RAID system is often also followed by a second failure before the array has had a chance to rebuild … rather concerning, since that can effectively negate the redundancy benefit of having a RAID in the first place.

Also of interest: drive manufacturers appear to be routinely making minor adjustments to the size of discs, even when the model number remains the same – this can cause problems when swapping out a dead drive, if the replacement is slightly smaller. Might be an idea to stockpile a few spare drives to have on hand which are from the same batch as your original set.

I noticed this on a discussion board today:

One of my favorite little bits of history is the way the king of Denmark, when Denmark encompassed at least the southern parts of Sweden, assessed taxes on ships passing through the waterways between the North and Baltic Seas. Captains of ships passing through were allowed to declare the value of ship and cargo without any recourse by the taxing authorities. On the other hand, the taxing collectors were authorized to purchase said ship and cargo at the declared value if they thought it would be profitable.

Those clever folks at sysinternals.com have a blog entry up describing how to run Windows with no services whatsoever enabled — a very neat trick.

The article is here and is well worth a read if you like to know what goes on under the hood on your Windows system.

How does the eye perceive colour? Probably a little differently than you thought. Context is everything, as the following link shows:

This may no longer be available from September 2005, so I’ve taken the liberty of reproducing it here: 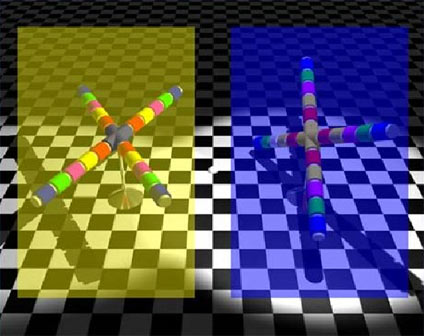 The centre section of each structure is exactly the same colour, even though one looks grey and one looks yellow. If you don’t believe me, copy the image to your favourite paint program and check out the RGB values.