My previous attempt to stop the Windows 10 default route vanishing turned out to be unreliable; after a few Windows Updates, the default route was gone again.

However, I’ve finally found a way to make a statically configured default route properly persistent across reboots (something that other operating systems, and older versions of Windows, have no trouble doing at all).

To recap: for various reasons, I assign static IP addresses to most of my PCs instead of using DHCP to allocate them automatically. As part of the configuration I specify a default gateway to the Internet, like this: 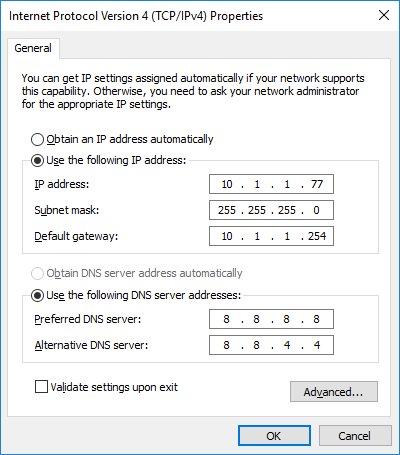 Windows 10 appears unable to remember this default gateway across reboots, especially when I have additional IP subnets configured on the same network interface.

This isn’t a big deal if I’m sitting in front of the PC, since I can fix it quickly. However, it’s a show-stopper if I need to access the PC remotely since it is no longer connected to the Internet. When it happens with our main family PC, it’s even more annoying since the steps to resolve it are not intuitive for my wife and sons.

Today, after yet another such unplanned outage (thank you, Windows Updates), a lightbulb finally went off in my head — why not use the existing Windows Persistent Route capability to add a persistent default route? I’ve now tried this approach on several PCs and it seems to work reliably!

So without further ado, if you too are suffering from this problem, here’s how to fix it.

That’s it! Your default route should now be added back automatically whenever you reboot. If you need to change to a different default route, just repeat the steps above.

My dad has a Samsung Smart TV (UE55H6400) which he uses mostly as a display device for his Sky+ box; the advanced features of the TV are a little beyond him.

Recently though, he’s been asking for a way to play movies locally. When we met for lunch, I gave him an 8 GB USB flash drive with some films and later, over the phone, I walked him through selecting the USB device for playback using the Samsung TV remote.

This should have been straightforward – it certainly is on my older Samsung TV. But no dice – whatever we tried, his TV wouldn’t recognize the flash drive. There are three USB ports, including one labelled “USB HDD” but it made no difference which one we used.

Perhaps I had accidentally formatted the flash drive using NTFS instead of FAT32? My mum, who is a lot more computer literate than my dad, plugged the flash drive into their PC and I examined it using Remote Desktop. Sure enough, it was formatted as NTFS. While the newest Samsungs can handle this fine, my Dad’s model is a few years old so conceivably it was expecting FAT32.

Copying the movies to the PC, reformatting the drive, and copying them back again took about 20 minutes (cheap USB flash drives are SLOW). Ultimately, it made no difference – the TV still refused to recognize the drive. We gave it up as a bad job.

A week later, I was visiting and had a chance to try it myself – exactly the same results. At least user error wasn’t to blame.

Eventually we figured it out – it’s rather obscure! It seems that at least some models of Samsung TV decide whether or not a USB device is “hard drive”-like based on the precise way it is formatted. A single partition doesn’t count; it needs to have a full partition table with multiple partitions for the TV to recognize it as a valid drive.

It’s not too bad though if you just follow through the numbered sections:

After a brief delay, you’ll have a freshly formatted USB flash drive that is now recognized by your Samsung Smart TV. Copy movies, photos or music to it and have fun!

I should emphasise that this only seems to be necessary for some models of Samsung TV (and also, reportedly, LG TVs); it wasn’t needed for my own model.

If RMPrepUSB seems a little too daunting, you could also try Rufus by Pete Batard of Akeo, only up the road in Co. Donegal. While I haven’t had a chance to use it for this particular application yet, using the Advanced option “Add fixes for old BIOSes” option should have the same effect. Please let me know if it works for you!