The US magazine Consumer Reports (similar to Which? magazine in the UK) has been in the technology news recently. As part of a comprehensive test of antivirus software packages, they commissioned a consulting company to create 5,500 new viruses to see how well market leading programs would cope.

The antivirus industry, led by McAfee, was immediately up in arms when they heard about it. Imagine the risk to society of these viruses escaping into the wild! What blatant disregard for consumer safety! And other similar scaremongering…

It only takes a little scratching below the surface to show that their concerns are, at best, misguided. The viruses created for Consumer Reports were simple modifications of existing viruses, altered so that their signature was no longer identifiable. The viruses were kept in a secure environment, and all copies were removed after testing – only a single CD remains, which is kept in a locked and secure cabinet on site.

Surprise, surprise – McAffee’s package didn’t do particularly well in the test; it relies heavily on a signature database to identify new threats. When viruses were still something of a novelty, this approach worked well – it often took weeks before a new virus gained notoriety, giving McAffee plenty of time to respond.

By now however, it is so easy for would-be virus writers to develop new viruses, and variants on existing viruses, that a pure signature-based approach is no longer sufficient. A more pro-active approach is needed, that can identify virus-like behaviour and quarantine or block the affected program. Of course, there will be legitimate tools which end up looking like a virus – commercial tools can be recognised and permitted explicitly, while a mechanism can be included to allow users to grant access to other programs on an as-needed basis.

Maybe the industry should use two distinct terms – “Virus removal”, for packages that can remove existing viruses which are already known to the program, and “Antivirus” for packages that can detect new virus strains and prevent infection in the first place. (Somehow, though, I can’t imagine vendors thinking this is a good idea.)

Whenever Which? reviews product categories that I know well, I find myself disagreeing with their conclusions; this doesn’t give me much confidence in their reviews of other products that I’m not familiar with. People I trust have made similar comments about Consumer Reports. In this case, however, they’re on the side of right. More power to them…

(In case you’re wondering, the top rated antivirus packages were from BitDefender and ZoneLabs. The full report is only available to subscribers.)

Steve pointed me towards an interesting demo video showing off the capabilities of the HAL 2000 home automation system. It lets you control your home using speech commands from any room – quite impressive.

The author has an extensive discussion of the technology involved (speakers, distribution amps, microphones, etc.) along with some comments on the limitations of the system.

(If that title doesn’t quicken your pulse, nothing will…!)

Following on from my mention last November of the guy who was experimenting with shaping traffic flow by varying the speed of his car on slow moving highways, Michael pointed me towards this interactive traffic simulator.

I don’t know if it’s accurate, but it’s good fun to play with…

Longtime readers (assuming there are any!) may recall a story last May about a new type of flatpanel CRT using nanotubes. The demo back then was impressive from a technology viewpoint, if not something you might actually want to sit down and watch.

Well, time has marched on and these products are almost ready for market. They are now known as Surface-conduction Electron-emitter Displays; somehow, I think SEDs will turn out to be the more popular term.

At CES, Toshiba unveiled some 37″ HDTV prototypes with a contrast ratio of 100,000:1 (yes, that’s quite good!). They hope to have 55″ production models towards the end of the year. Response time is on the order of 1 ms. Another description can be found here.

And here’s a particularly enthusiastic first-hand review from one of the CES attendees, complete with photo: 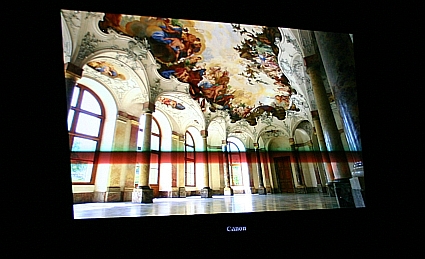 I hadn’t been paying much attention to this AJAX thing, until I saw an article about it in Dr Dobbs Journal (Feb 2006).

AJAX is Asynchronous Javascript And XML, essentially a collective name for a group of technologies that together allow web pages to asynchronously interact with a remote server without losing the page context. This leads to the ability to design significantly more interactive interfaces.

The best example I’ve seen is the one cited in the Dr Dobbs article: Google Suggests. As you type in search keywords, a realtime display appears below showing you suggested matches for what you’re typing. All the words retrieved are fetched from Google’s server in realtime as you type, without you even noticing. Very cool…

From the Useless But Cool dept: Andrew Carol (no relation) has built a Lego Difference Engine in the fashion of Charles Babbage’s original.

Due to structural limitations of Lego (plastic bricks and gears can’t handle the same stresses as metal), it’s a cut down version but still functional. Very cool.

And on the subject of Lego, if you’ve been playing with Lego Mindstorms (Lego’s robotic kits), Lego have just announced Mindstorms NXT, the next generation – with a 32-bit RISC processor and a number of other significant improvements. My second childhood should be due any day now, and I’m looking forward to playing with this…

Time for yet another mapping link:

SketchUp is a rather cool plug-in for Google Earth that allows you to add real 3D buildings to the Google Earth city view.

Traditionally, digital cameras have to make a trade-off between aperture size and depth of field – the more light you let in (and the better the peformance in low light), the more prone the image is to blurring.

Now researchers have come up with a way to post-process focus after image capture, by inserting a sheet of 90,000 lenses, each 125 micrometres across, between the main lens and the image sensor. The angle of each light ray hitting the sensor is recorded, as well as the intensity. This allows clever software to refocus the image afterwards where necessary.

Fasncinating concept, and no doubt we’ll see some variant of it turning up in commercial products in the future.

CNTs are Carbon Nanotubes, a new technology that allows flatpanel screens to be constructed from what is essentially an array of thousands of tiny CRTs, each CRT representing a pixel or so.

A friend (thanks Mike) pointed me towards this company which has been experimenting in the area. Click on Demonstrations on the left to see a nifty little animated demo of their current prototype (and be sure to read the caveats as well as to why the quality isn’t wonderful yet).

Why is this stuff of interest? Primarily because the potential exists to make absolutely massive screens using this technology. Plasma and LCD screens are limited in size, because they rely on a single sheet of semiconductors to make the whole screen – the technology to seamlessly stitch together multiple panels to make a bigger screen doesn’t exist.

For those screen types, cost increases rapidly as the size gets larger, because it becomes more difficult to get screens with an acceptably high number of working pixels.

With CNTs, this is no longer an issue – you simply manufacture buckets of tiny screens (say 4″ x 5″) and stitch them together to make as big a display as you like. Tiny screens means much higher yield which in turn translates to lower prices. Plus, as a bonus, you get all the benefits of a normal CRT (bright picture, fast refresh, etc.) without the drawbacks of massive weight and depth.

Probably another year or two to go before these hit your local electronics superstore, but it can only be a matter of time.

(On the other hand, whatever happened to bubble memory?)

I bought a Tevion 32″ LCD TV from Aldi a few months back, and was intrigued by the 8-pin RJ45 connector marked ‘serial’ on the back panel.