For the past month, I’ve been upgrading the hard disk on a friend’s Compaq ProLiant ML-370 server (first generation). I finally completed the job on Friday.

Why so long? Surely a hard drive upgrade is a five minute job? Well usually, yes. However, Compaq have gone to some trouble to make it difficult.

The old server had two 18 GB UltraSCSI drives, and had run out of space. The plan was to add a cheap, large IDE drive to provide additional data storage, while retaining the SCSI drives for Windows 2000 and Microsoft Exchange Server. Thus, a 160 GB Maxtor IDE drive was purchased. 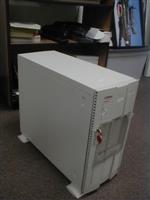 First problem: the ProLiant has an internal IDE interface, but it does not support hard drives! The BIOS actually says this when you try to configure it – or it would if there was a BIOS, which there isn’t. Instead, you have to download a four floppy disk System Configuration Utility from Compaq’s website. In this day and age, even finding four working floppy disks (not to mention a working floppy drive, in a server that has been actively sucking in dust for almost five years) is a challenge in itself.

(Later on, I discovered you can also download the SmartStart 5.50 CD to do the same thing; there are later versions available but they don’t support the ML-370 G1).

Anyway, ignoring what the BIOS said, I connected the IDE drive to the internal IDE interface and booted up. Windows found the drive okay, decided to limit it to 137 GB capacity (despite running SP4, and enabling the enhancement to support 48-bit LBA addressing). No matter, we could live with 137 GB.

What we couldn’t live with was the speed – appallingly slow, and with 100% CPU utilisation whenever the drive was accessed. A quick visit to Device Manager confirmed that the interface was running in PIO mode – Programmed I/O – rather than using UltraDMA which is much, much faster. Apparently this is one of the limitations of the Compaq IDE interface (and probably the reason why they don’t support IDE drives).

Next bright idea: add an internal PCI IDE card. A cheap ITE 8212 non-RAID card was duly ordered and installed, and the card’s onboard BIOS had no problem detecting all 160 GB of the drive — great! “Non-system disk or disk error” — not so great!

I couldn’t find any way to tell the IDE card’s BIOS (or the Compaq System Configuration Utility) to avoid trying to boot off the attached IDE drive. There is a boot priority order, but this ignores plug-in IDE cards and only pays attention to the onboard SCSI and IDE controllers. Upgrading the Compaq system Flash to the latest supported version didn’t help matters.

Next step: disable the IDE controller card entirely in the SCU and let Windows 2000’s Plug & Play mechanism configure it instead. For a while, it looked like this would work: Windows correctly detected the card and installed the latest drivers, which I had downloaded from their website. However, it point blank refused to find any drives attached to the card. (I knew the drive was there since the BIOS had correctly spotted it earlier.)

After much googling, and reading discussion threads from others who had tried and failed to get an IDE drive going in a ProLiant, I was almost ready to give up. However, there was one thing left to try: a different IDE controller card.

After a little research, I came across the MRI RAID IDE Controller which is based on a Silicon Image/CMD SiI0680 chipset, rather than ITE. After it arrived, I swapped out the ITE card for the new one, disabled it in the SCU, and once again let Windows Plug & Play figure it out.

And this time … it worked! CMD’s IDE drivers must be a bit more robust/adaptable than the ITE drivers, since it had no trouble at all detecting the hard disk. Better yet, it recognised the full 160 GB of drive space.

Compaq have always made PCs that were almost but not quite completely compatible with normal PCs. While the ProLiant series have many fine attributes, incidents such as this help explain why I will never, ever, buy a Compaq server myself.