Alongside the main CES convention, there were numerous seminars and panel sessions to discuss issues of interest to the consumer electronics industry. Most of these cost money to attend, but some were open to all CES participants.

The first session we attended (on Monday afternoon) was CNET’s Next Big Thing, a discussion about three hot areas of debate in the industry at the moment:

Several industry panelists (including a CNET reader flown in from the UK to represent the consumer) discussed these items at length; the audience then voted electronically on how they thought things would develop in the future. 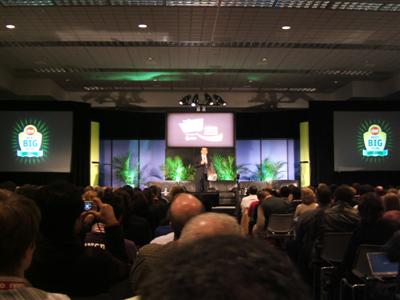 On mobile video, the verdict was: yes, there is a new and growing market for media playback on mobile devices, but access needs to become far less restrictive (both in price, and range of media available) before it will take off. Mobile video will supplement existing markets rather than replacing them.

Dynamic content like news clips, music videos, and short length TV programs are more suited to these devices than feature length movies. One panelist predicted that the production style of programs will change to match the constraints of the mobile devices – more talking heads, fewer panoramic landscapes, etc.

All reasonable points. However, the most important point was only briefly mentioned: mobile video need not be streamed. People use it to fill time when they would otherwise be bored (standing in a queue, waiting for something to complete), and it suffices to have pre-loaded content available on their mobile device; it’s not a big deal if it’s several days old.

With modern video codecs and ever-increasing flash capacities, it’s quite feasible to store multiple movies or (more likely) TV programs on your portable device. I think this trend is just beginning to gather stream.

The death of DVD?

The panel were (eventually) united in their view that DVD wouldn’t be going away anytime soon – certainly not by 2010, as had been suggested. The tangible nature of a DVD, which makes it collectable, suitable for gifts, easy to use and distribute, etc. all combine to make it unlikely to disappear.

However, the panel did did agree that online streaming media will gain significant following as well. (No surprises there.)

I’m broadly in agreement with this view. It takes a long time for a given technology to die out; after all, there are still plenty of VHS tapes around, even though it is now difficult to buy a VHS recorder.

I also doubt we’ll see broad acceptance of streamed video until most households have a fast broadband connection (where ‘fast’ means 10 MBps or higher, with no contention).

Digital Rights Management (DRM) was the most contenious discussion, with representation from the legal profession, movie industries, and consumers, as well as several industry observers. Everyone agreed that some sort of rights management was essential, but making it transparent enough so that consumers were not unduly restricted when they tried to use media they believed they owned was judged difficult.

Apple’s ITunes was given as an example of how to make DRM straightforward, so that customers are not always even aware that any special restrictions apply.

The biggest hinderance to existing DRM technology is that it goes against the grain of what consumers are used to. If you buy a CD, you can take it to a friend’s house to share with them or loan to them. You can play the same CD in your living room, your bedroom, your car, on your laptop, and anywhere else that has a CD player.

This is almost never true for media protected with DRM, especially where that media has been downloaded rather than delivered in some sort of physical packaging. While providers are entitled to protect their content, they need to find a less onerous way to do so than has currently been attempted.

I have no doubt that this problem will be solved; until then though, consumers will continue to be highly suspicious of anything resembling DRM.